Herman Baker Park is a large community park located on 83 acres. Within the park, Pickens Lake has a considerable amount of shoreline and a nature trail system around the lake. The lake dam is a very popular location for sledding after every snowfall in Sherman. The park has mature vegetation and wildlife, giving it a private, naturalistic and serene setting. It’s hard to believe that you are still inside the city when you visit Herman Baker Park.

Park History:
Herman Baker Park is located in west Sherman off of Hwy. 56 and opened in 1979.
The centerpiece of the park is Pickens Lake, a flood control reservoir completed in 1975. Its construction was a cooperative project between the U.S. Department of Agriculture’s Soil Conservation Service (now the Natural Resources Conservation Service), Grayson County, the Choctaw Watershed Improvement District, the Collin County Soil Conservation District, the Upper Elm-Red Soil Conservation District, and the City of Sherman. It is located within the Choctaw River Watershed and cost $182,000 to build. Its size varies with the amount of rainfall but is typically around 30 acres; during periods of intense rainfall it may be as large as 63 acres. The earthen dam is 54 feet tall and 1,270 feet long.

The majority of the land for the park was donated by W.C. Pickens.

In 1975, the Sherman City Council named the park Baker Park and the lake Pickens Lake. In 1977, the park was renamed Herman Baker Park.

There is a 1.5 mile hiking trail around the lake with an additional loop along the creek that makes a 1.7 mile long trail. The park has clean bathroom facilities, picnic tables, and benches along the trail. There is fishing, hiking, mountain biking, sledding, picnicking, and a tree trail.

The Herman Baker Park Tree Trail was completed in the spring of 2016 as part of an Eagle Scout Project by Gerald Clark, Troop 45, Howe, Texas. There are 20 trees labeled with signs on the trail around the lake. Online resources include an updated trail map plotted with the locations of the trees, interesting information about each tree, and approximate GPS coordinates for each tree. Some species of trees have multiple locations because of their different appearances. 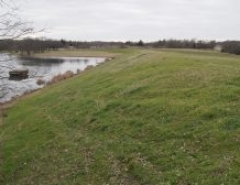 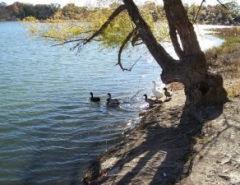 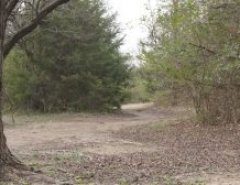